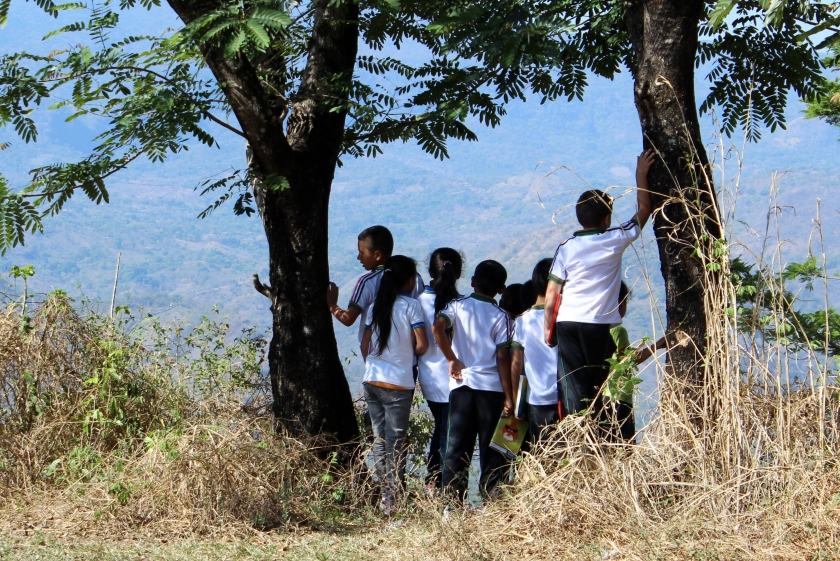 Today’s education has a great challenge in keeping up with changing paradigms happening at high speed on a global scale. Are schools and universities preparing students to perform well in everyday life? Can learning based on memorization and passive information reception have a long-term impact in individuals? Do children and adolescents actually enjoy education or do they just study to obtain a certificate to increase the prospect of a better job?

A few days ago I was invited to Perquín, a small town in the north of the province of Morazán, in eastern El Salvador. There I visited the Amún Shéa School, founded in 2008. Amún Shéa is breaking with the scheme of traditional learning and offers an alternative that empowers natural ability and personal interests of its students. The name of the school means “land of seedlings” in the Lencan language, early inhabitants of the region.

The students themselves showed me around the school, while explaining what it was all about. Amún Shéa works with problem based learning. The students, starting in the first grade, express their particular interest and learn not only the required courses like math or biology, but also learn to analyze, make decisions and get acquainted with the reality of their region. The world of the students is not limited to home and school, it expands to the community.

Every week the students present the results of their projects to their peers. The themes they talk about are many: the quality of drinking water in the town, the renovation of a nearby tourist center, the production of desserts and cookies with regional products, the number of migrants from the region, fish farming for local consumption and aquaponics as a sustainable farming technique, among many more.

The remarkable part of all this is that we are talking about kids between the ages of seven to fourteen, that as part of their projects also learn to write research papers that include general and specific objectives, synthesis and components of a project. Writing these types of documents helps with language and writing, and also builds critical thinking and prepares them for higher stages of education or work.

The school takes advantage of several free online programs to complement general learning skills, making the students familiar with new technologies and the responsible use of internet. You can see the students of the school concentrating, working on their laptops, creating 3D blueprints, making animations or learning English.

Amún Shéa is mostly financed by donations and external funding. The project is supported by the Perkin Educational Opportunities Foundation – PEOF – and originated due the lack of prospects and opportunities for the residents of the region. It is precisely from eastern El Salvador that most people migrate to other countries, especially to the USA.

Ron Brenneman, one of the founders of the school, believes it is necessary to break the vicious cycle of poverty through a change in the way of thinking. If the only options now in northern Morazán are to migrate to the capital city, San Salvador, to look for work, accept temporary agricultural jobs (like the coffee harvest) or leave the country, Amún Shéa is providing the necessary tools so that young people have different prospects and work to improve not only their lives, but also the future of the region by taking advantage of the potential that it offers.

Interestingly enough, this initiative is born in one of the poorest and most forgotten regions of the country, far away from the central government or from national development poles. Northern Morazán has one of the highest rates of poverty and lowest rates in schooling in the whole country. Besides that, it was one of the hardest hit regions during the civil war of the 80’s.

It is perhaps or maybe precisely because of its apparent disadvantages, that this kind of project can work. In San Salvador, bureaucracy reigns and attempts to try something different are answered with a “that’s not possible” or just frozen without a resolution because it is not laid out in the “instruction manual.” In Perquín, necessity is the mother of invention and has forced a try at nontraditional schooling. The good news is that it works.

The school adds a new grade every year so its approximately 90 students can continue their schooling under the same system. The dream now is not only to open high school but, in the mid-term, to open a university. For this, PEOF is actively seeking organizations or individual donors who can help the dream come true. If this is achieved, the new prospects for young people, not only from Perquín, but from the whole province of Morazán will have a deep impact for its residents.

The students with whom I talked were quite content with their learning system. Some have been there since the beginning of the school in 2008, but for other students who were in traditional public schools before, the change is immense. For visitors like me to find adolescents talking with such certainty and confidence and who are clear about what they want to do with their lives, it is quite impressive. It makes me want to go back to school again, as long as it is under this system.

There is a lot of discussion going on in El Salvador about the need to improve and renovate the educational system. Amún Shéa is a clear example of what can be done when you stop talking and get to work.